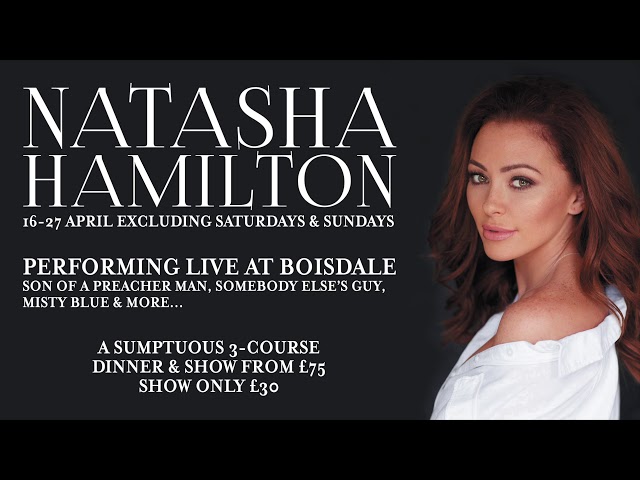 FORMER ATOMIC KITTEN SINGER NATASHA SINGS HER GREATEST HITS & THE BEST OF SOULrn'Son Of A Preacher Man', 'Somebody Else's Guy', 'Misty Blue' & more rnrn16th-20th & 23th-27th April 2018rn ALL TICKETS INCLUDE A DELICIOUS 3-COURSE MENU (EXCLUDING LOUNGE TICKETS)rnSEE MENU HERErn rnNatasha Hamilton is best known as the lead singer of Atomic Kitten, one of the UK's most internationally successful girl groups of all time, selling over 20 million records worldwide with numerous global number 1 singles (Whole Again, Eternal Flame & The Tide Is High ) and albums.rnAs a solo artist Natasha performed with the late, great Robin Gibb and she was invited to tour with the legend that is Lionel Ritchie, joining him on his nationwide tour. Tenatious and talented in equal measures, Natasha wanted to expand on her successes and plunged herself in to the world of Musical Theatre. She marked her bold career move by landing a debut lead role in the highly acclaimed West End Show

Your request has been sent to the related supplier. They will review your request and you will receive the OTC code in your email. Once it is approved